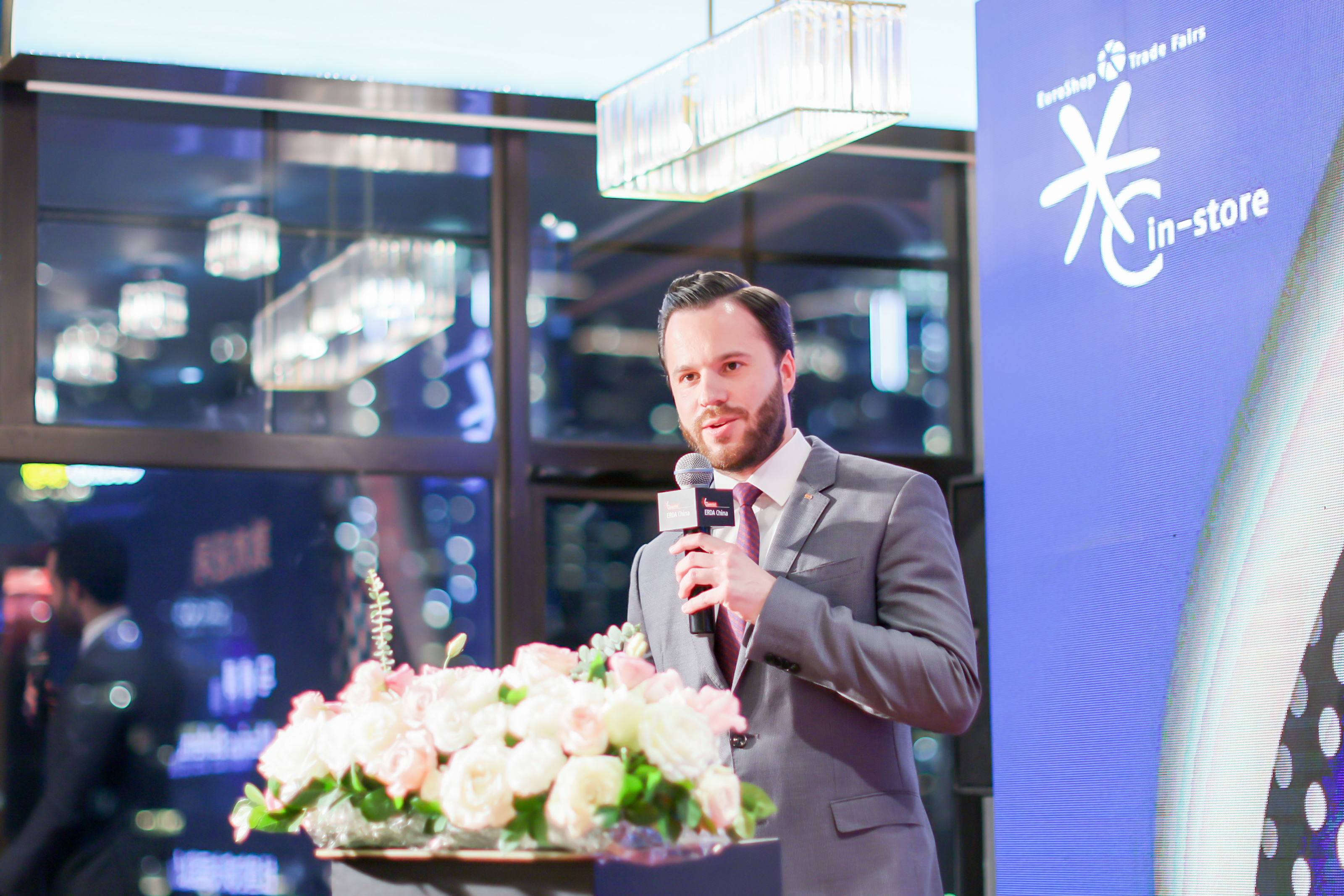 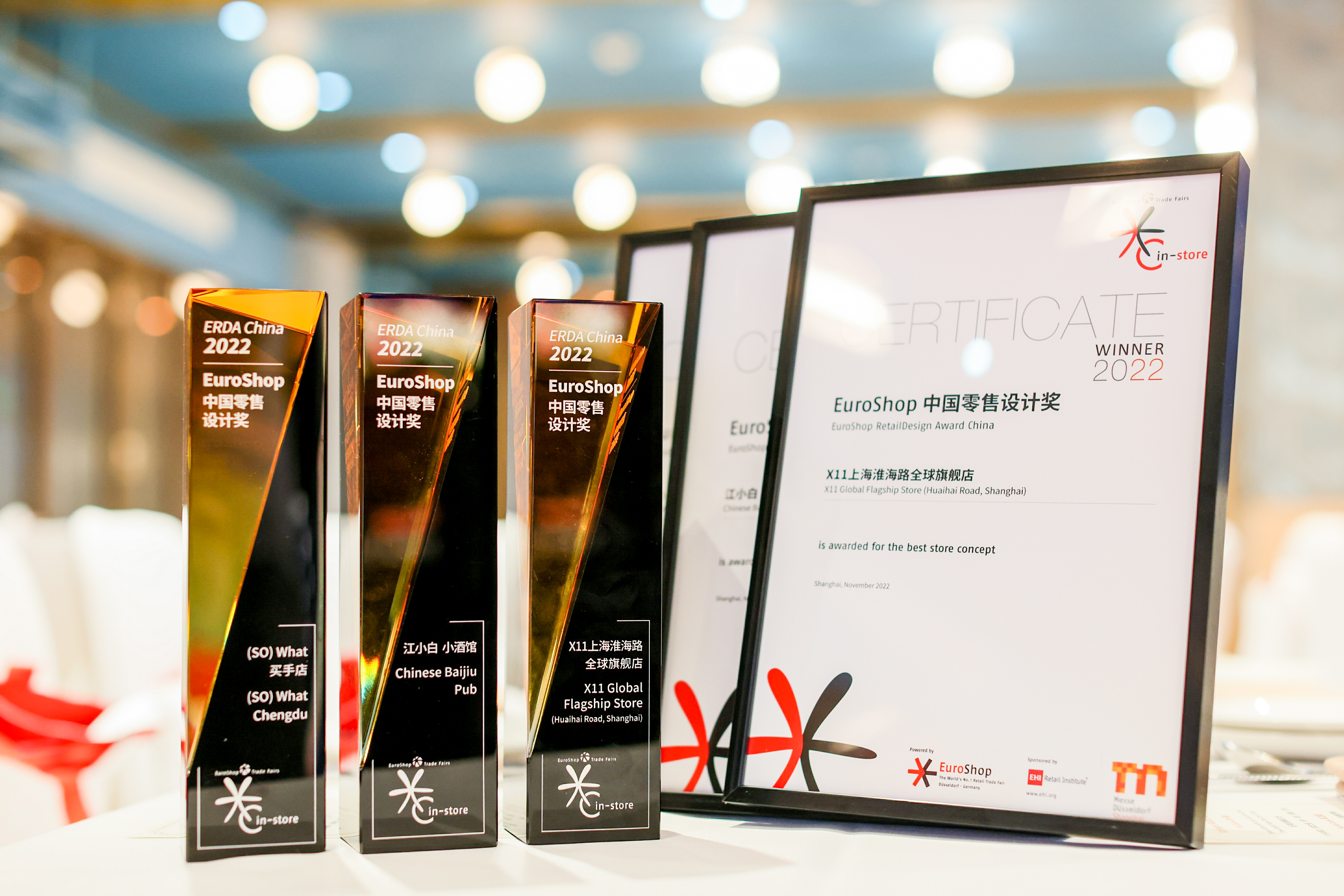 In addition, a business match making event was successfully held at the ERDA China dinner party. Around 90 representatives from retail brands, in-store design companies and in-store solution providers attended the event, and everyone was very satisfied with the opportunity to have face-to-face communication. X11 entrusted BloomDesign to conceive its first global flagship store, which sits on Huaihai Road — known as the most stylish commercial street in Shanghai. The new store quickly becomes a hot destination on Middle Huaihai Road and sets an example for the exploration and development of toy industry. Its immersive shopping experiences have attracted many young people in Shanghai. To create a story-telling and experiential space, the design team took "X Ark" as the theme, and adopted spatial narratives to tell a story that when the universe collapsed, a scene of "rebirth after doomsday" was actually reconstructed. "X Ark" is a refuge for beauty, a spiritual ark for Gen Z, a dream destination for the young, and a forward-looking, diverse and ideal ACGN world built on an apocalyptic wasteland.

The design team renovated the 5-storey facade of the building where the flagship store sits. By taking advantage of the large scale, the designers created a brand new 5-storey facade that consists of many "blind boxes". The facade also functions as a neat, orderly LED lighting wall to strengthen the visual identity of the store on the street, helping attract passers-by to explore inside. When the lighting fixtures are turned on at night, each luminous box forms distinct pixel patterns, well expressing the brand's attitude. In order to break the independence of the two floors of space and maximize the integrated brand experience, the floorslabs of the ground floor were removed to connect it with the underground floor, so as to extend the space downwards and make it more magnificent. After demolishing and stripping treatments, the existing reinforced concrete beams and columns are exposed and retained, thereby restoring original structures. After reconstruction, the silver matte stainless steel and exposed grey cement, complemented by lighting and multimedia device featuring a sense of technology, reveal a strong cyberpunk style and appear cooler, more trendy and futuristic.

The main feature of Chinese Baijiu Pub is the combination of traditional and modern design, its traditional Chinese courtyard tribe and industrial laboratory does not look like the standard Chinese and Western kitsch in the bistro. In fact, the crust is close to high-end spaces, emulating ultra-luxury kitchens and trendy retail boutiques. Space sharp, minty and modern. In this restaurant, a custom designed pavilion lighthouse, inspired by Chinese Dunhuang architectural carriers and beautiful Dunhuang murals. It transports diners into a modern interpretation of the Chinese History Museum, a Pub that celebrates Chinese drinking culture and modern Chinese aesthetics.

In the process of interior decoration design, natural materials such as bamboo, stone and cement, as well as environmental protection integrated man-made panels are used as finishes. The use of natural materials plays an important role in the ecological benefits of green design concepts. Because people have been pursuing a more natural way of life, after the epidemic, people's yearning for natural life has become stronger and stronger. 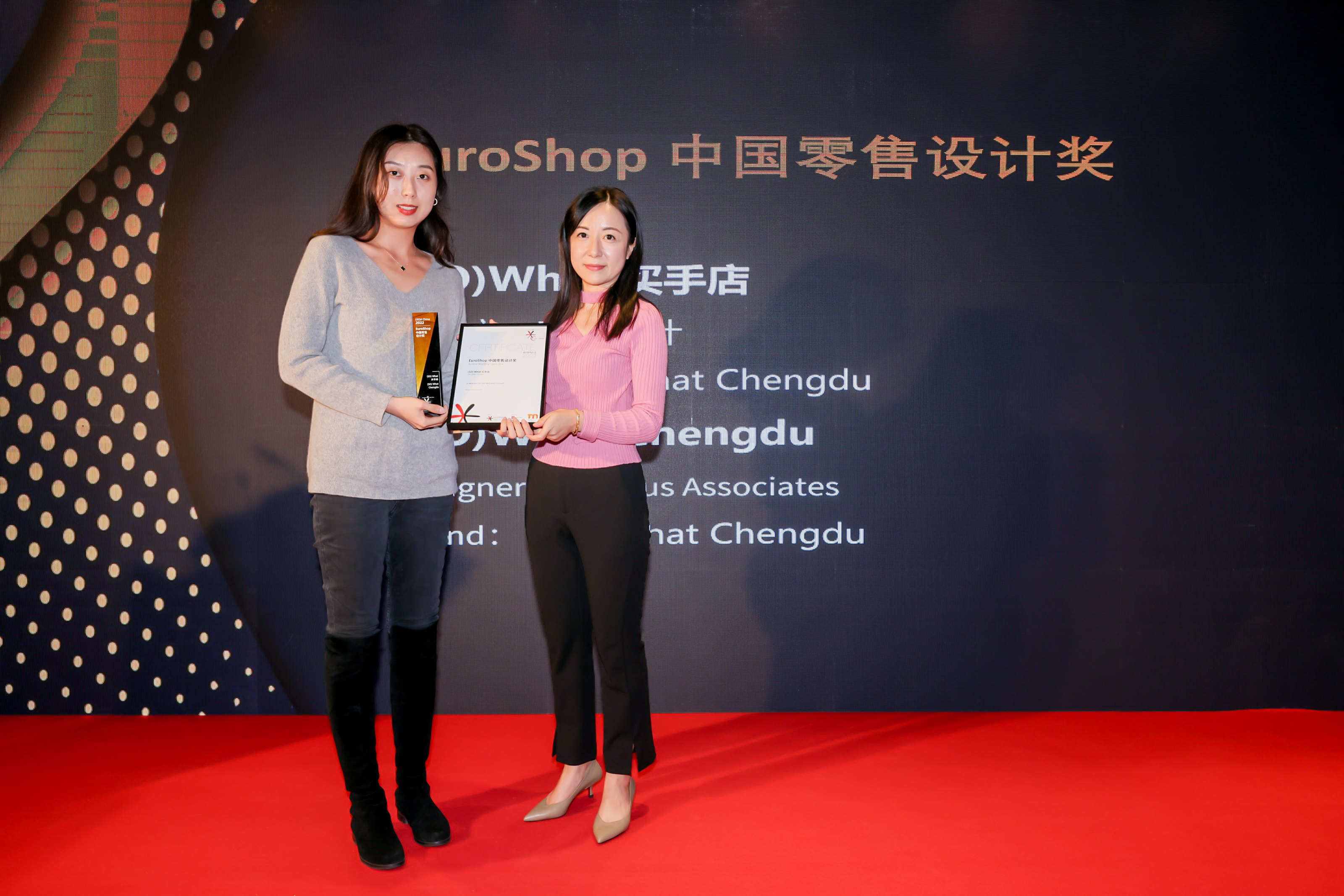 Taking "Don't know, Don't care" as the core brand values, (SO)What advocates that every female can find her own dressing style in the boutique, and represents the unrestrained and independent characters of contemporary females. Drawing inspiration from the local profound play-watching culture, Various Associates took "Stage" as the design concept. The team maximized the unique site advantages to build a dynamic stage that integrates modern technology and dramatic tension, hoping to bring customers multi-sensory immersive spatial experiences. 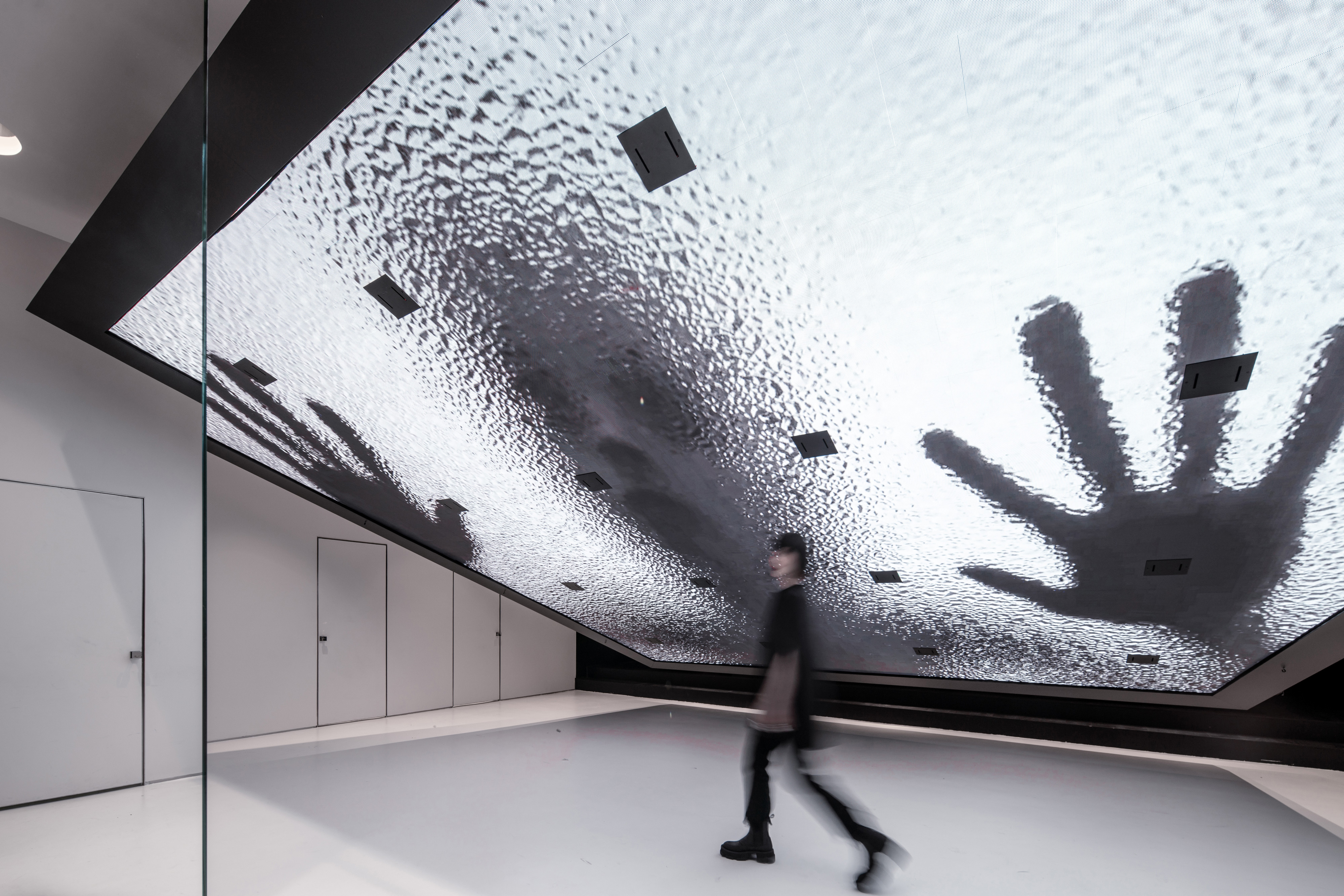 As one of the most iconic fashion boutique stores in Chengdu, this project shows the unique culture of the city, and interprets the local cultural context through new approaches. The giant suspended rotating screens appear dramatic and incorporate modern technology, reminding customers of the long, profound play-watching culture in Chengdu. The square double-height facade is open, transparent and eye-catching, forming a favorable spatial relationship for optimizing the view and interaction. Based on the theme "stage", the spatial design explores multi-layer expressions and experiences. The rotating laminate panel weighing over 7 tons is suspended in the lightest manner under restricted conditions, thereby realizing a screen that can rotate 180 degrees horizontally and move vertically with electric control. Changing images on the large screen, background music, contrast of black and white tones, and the silver wrinkled accessory counter, all those elements promote the transition of spatial structures and circulations in line with the storyline of "stage", hence creating holistic, immersive experiences and ambience.

ERDA China (EuroShop RetailDesign Award China) is derived from ERDA which is one of the supporting programs of EuroShop Trade Fairs. ERDA is organized by Messe Düsseldorf GmbH and EHI since 2008 to award the most compelling store concepts from all candidates. A well-honed mix of store architecture, colours, materials, lighting and visual merchandising, the clear communication of the product range as well as direct means of appealing to customers are key criteria for the jury of experts.

As the Chinese retail industry has formed its own pattern with Chinese characteristics during its development, one set of criteria is no longer the optimal assessment for retail designs in both China and other countries, we establish ERDA China for the unique needs of the Chinese retail industry, and invite more domestic experts to join the jury and crown the outstanding store designs in China.

China in-store 2022 to Be Postponed 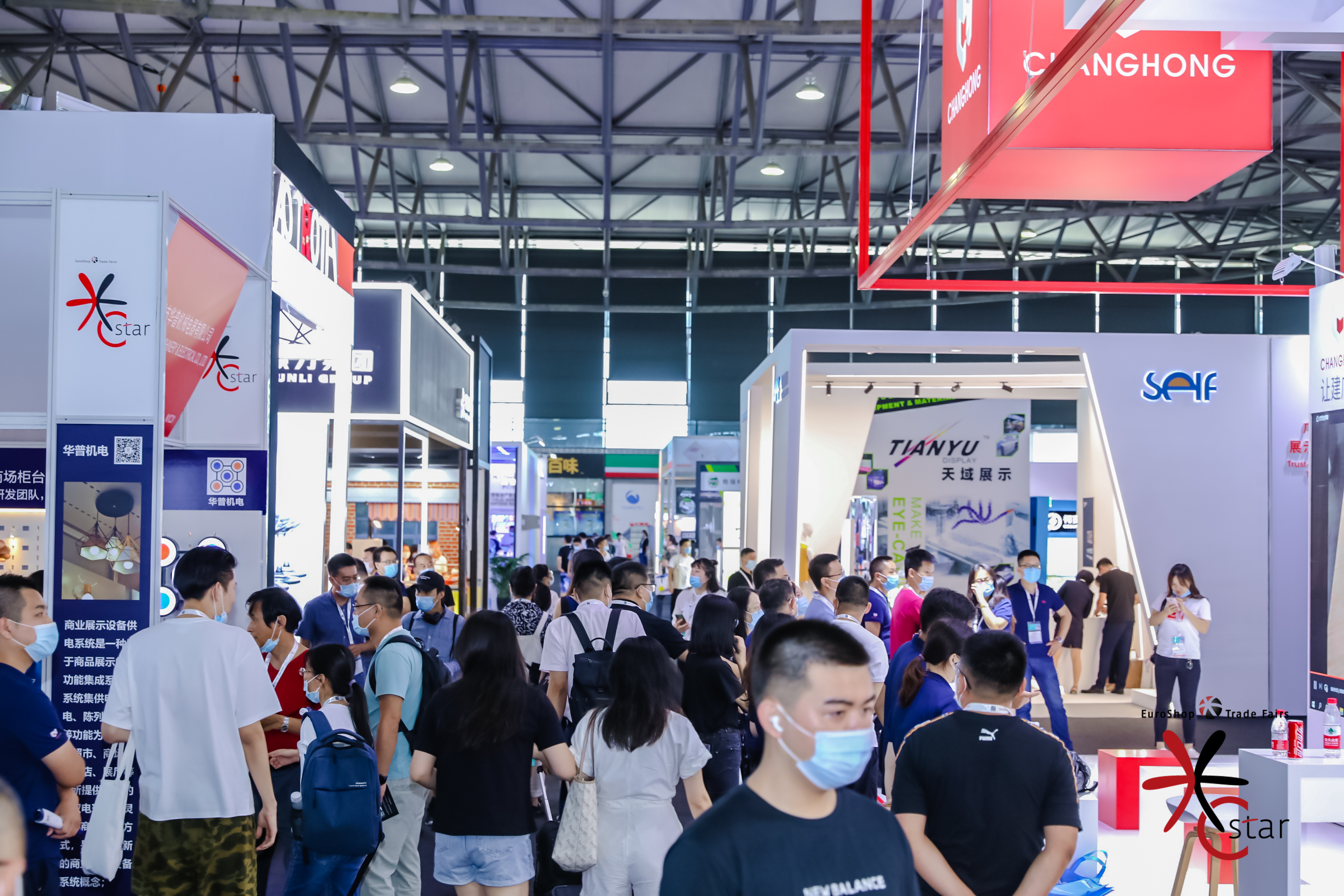